I hope you like the beautiful wrought gilded chalice gracing the cover of my new book The Grail Mysteries as much as I do. It was commissioned by Abbot Suger of St Denis, France, in the twelfth century, while its sardonyx cup was made in Alexandria in the second century BCE.

Those who know about sacred sex magic will instantly recognise why Abbot Suger’s chalice makes a most appropriate cover for a mythic tale which explores that subject in depth. This chalice is symbolic of the Marriage of the Sun and the Moon, the alchemical operation that is at the heart of the ancient mysteries of the Grail which is about the shamanic form of sex that has always underpinned Sovereignty.

I think Abbot Suger knew this too. Certainly his chalice shows us that these alchemo-sexual practices were practiced in medieval times and also in pre-Christian Alexandria before the Mystery Groves and the Library of Alexandria were destroyed by successive Roman emperors.

If you look closely, you’ll see that the wrought gilt handles are arranged in a stylistic Fibonacci representation of the energetic serpents as they climb their way up the djed (the spinal column) during sacred sex, until they reach the inner Chalice (Holy Grail) of the hypothalamus. Then they hang their heads over the rim and secrete red and white serpentine drops of nectar on to the pineal gland, thus activating the Third Eye. The drops merge and swirl, and blend together to form a pinkish colour on the bottom of the hypothalamus, as depicted on this sardonyx cup. This inner alchemic procedure leads to a huge technicolour explosion of bliss and ecstasy that lights up and activates the inner crown with what medieval alchemists called the Peacock’s Tail. 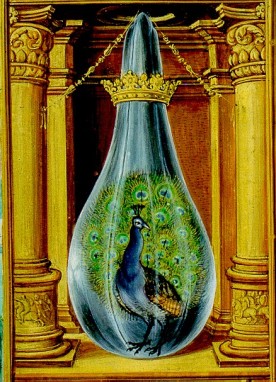 What has shamanic sex magic to do with Sovereignty?

I’ve covered this is in much more detail in my book Reclaiming Sovereignty. But in a nutshell, shamanic sex magic is vital for sparking the Sovereignty and wisdom of the man or woman within, and it used to be that a king would spend the night of his coronation with a hierodule, or sacred prostitute, who initiated him.

Sometimes, these hierodules were made queens. Legend tells us that Kiya became Pharaoh Akhenaten’s wife after he fell in love with the aroma of her hair on his coronation night. However, whether or not such women are ever officially enthroned, they are always the true queens of the land. If you were to study the etymology of the word ‘queen’, you would likely come to the same view.

So part of my new book, The Grail Mysteries, is about a middle-aged prostitute, in fifth century Britain, who discovers that she comes from a long line of hierodules and is thus a true queen of the Blessed Isles.

As we follow her awakening, we also benefit from the Virgo Teachings that she receives and, in this way, we learn that a true queen is not necessarily one who is anointed with oil on her forehead by the Archbishop of Canterbury. It is one who carries the faery blood and who is anointed by the nectars that flow from the actions of the black and gold serpents during shamanic sex magic with the divine.

A true queen does not necessarily wear a crown on her head and when she does, it is only to symbolise that the crown in her cranium has been fired up by the ignition sparked after the red and white serpentine drops have fallen on to her pineal gland or Third Eye, and her Inner Sun has risen within her.

In this way, a true queen holds the Sovereignty of the nation, which has been passed into her safekeeping by the spirits of the land. Only a true queen can make a king who is fit to rule.

What else is in this book?

This new book is a sequel to my last one, The Bright World of the Gods, although you don’t have to have read that to enjoy this one!

The Grail Mysteries charts the continuation of the love story between Arawn, the Lord of the Underworld, and Elen, the Upper World spirit, who have taken human form on Earth. We also join Myrddin (Merlin), Taliesin, Manawydan, Creiddylad, Gwyddion, Arianrhod and the eight dwarves in their quest to bury the Thirteen Treasures of Britain. All this, despite the best efforts of the Eye of Soros, Bricriu of the Poison Tongue and Vlak the Dragon Slayer, who are furiously trying to steal the Sovereignty of the Isles of the Blessed.

You will also hear Taliesin’s moving rendition of an original Mabinogion myth about how a huge and bitter gulf came about between Ireland and Britain – a gulf that is still yet to be bridged properly and which led to the head of the giant king Bran being buried in the land, for protection.

Get The Grail Mysteries at Amazon.com #ad

Get The Grail Mysteries at Amazon. co.uk #ad

Get The Grail Mysteries for your Kindle here #ad

But isn’t this just a faery story?

Well, yes and no. It is a faery story for adults. And all in all, it is a good rollicking tale of adventure, heroism, romance and sexual magic. However, it also contains, at a deeper level, the ancient mystery teachings, yet in a “pill” so sugar-coated you will not even notice it going down.

Thus you will come to understand how the Holy Grail is a sacred symbol that was rooted in natural philosophy long before the Roman Christian church co-opted it and you will benefit from the Grail teachings on sexual alchemy, shamanic Earth magic and cosmological lore.

“Grael” means “cauldron” or “chalice” and the original Holy Grail in the old Celtic, pre-Norman myths is the Cauldron of Inspiration of the hag goddess Ceridwen, who inspires the tongues of poets. It is also the Cauldron of Regeneration, which is engraved on the Gundestrup Cauldron (200 BCE).

As Caitlin Matthews explains in Mabon and the Guardians of Celtic Britain:

“The cauldron is the prototype of the Grail itself, the otherwordly vessel whose gifts include healing, rebirth, knowledge, spiritual fulfillment, paradisal bliss and magical power, as well as the provision of spiritual nourishment.

“The cauldron is the pagan resonance of the Grail, which has been identified with the redemptive symbol of Christ’s new covenant. Both Grail and cauldron dispense the draught of everlastingness; both are vessels that have otherworldly provenance; both are attainable only to people of sovereign power or heroes of daring courage.

“Death – physical and spiritual – is written into the scenario of the quest for both the Grail and cauldron: Those who fail are slain; those who win die to the world and are reborn, or are initiated into a different state of life.”

After reading The Grail Mysteries, I hope you will realise that the real Holy Grail is still a tool today for spiritual self-empowerment and one that can be employed to gain enlightenment and Sovereignty by any questing seeker who is genuine, courageous and true.

“Who does the Grail serve?” asked King Arthur’s knight, Galahad, in the thirteenth century High History of the Holy Grail.

It is here to serve you.

Get The Grail Mysteries at Amazon.com #ad

Get The Grail Mysteries at Amazon. co.uk #ad

Get The Grail Mysteries for your Kindle here #ad